About Living in exile on the planet Vulcan, the ragtag former crew of the USS Enterprise steal a starship after receiving a planetary distress call from Earth: a space probe has entered into orbit around Earth, disabled global power on the planet and evaporated the oceans. Captain Kirk (William Shatner), Spock (Leonard Nimoy) and the rest of the officers travel back in time to retrieve now-extinct humpback whales, which Spock has deduced will communicate with the probe and send it away from Earth. 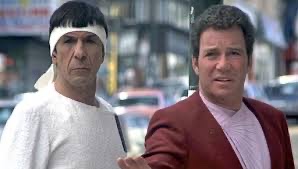 I always loved this movie. It still remains my favourite out of the Original Series silver screen outings. Yes, I am aware that Wrath of Khan is the ‘better’ movie, but I will always be too freaked out by the bug that’s put into the Botany Bay Landing Party’s ears.

So here it is, the equivalent of the Ewoks in Star Wars. We’re boldly going… so save some humpback whales.

I still love it. I still find it charming if not a little silly. It’s not ideal as a stand alone, but is the reward for putting up with pervious sub-par films.