About
In 1991, talented figure skater Tonya Harding becomes the first American woman to complete a triple axel during a competition. In 1994, her world comes crashing down when her ex-husband conspires to injure Nancy Kerrigan, a fellow Olympic hopeful, in a poorly conceived attack that forces the young woman to withdraw from the national championship. Harding’s life and legacy instantly become tarnished as she’s forever associated with one of the most infamous scandals in sports history.

The Good
It’s a good movie that keeps its pace and takes on an almost meta quality. It doesn’t claim to be telling the truth, but many interpretations of the truth. There’s a lot more humor to it than the trailer gives credit.
The nostalgia for the 90s is very real in this movie and gives the whole tone a gritty edge that I hope to see in more. I just wish this was part of the ’88 Winter Olympics; you’d then have a trilogy of films to watch.

We can’t leave the good without talking about the amazing Allison Janney. West Wing alumni deserved every single win during awards season. She is brilliant in everything she does and I, Tonya is no exception. She’s on point with her characterisation of Mrs Harding and the depiction of what I believe is COPD.

The Bad
I obvioiusly don’t know Tonya Harding personally, but the end of the movie shows, as many biopics do, clips of the real life counter parts. Based upon the clips seen, Margot Robbie plays Tonya a little too hard. In the clips and from other footage I’ve seen, there was a softer side to her. I would have liked to have seen that represented. 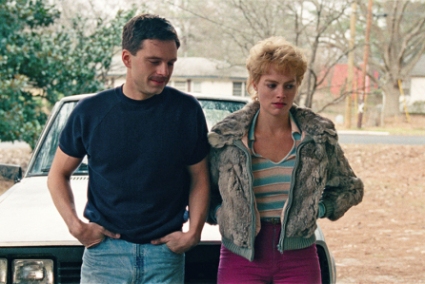 The Ugly
That ‘tache! Poor Sebastian Stan did not make that facial fuzz look good.

As always with biopics of this nature, they are uncomfortable to watch. The violence, the anger and the damage makes for an entertaining movie. However, it does pull you out when you remember it is someone’s life unfolding before you.