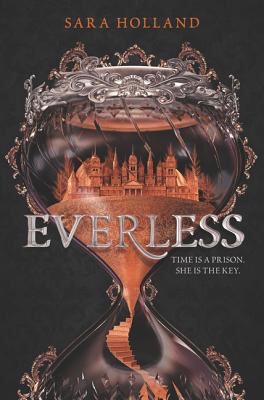 It’s not often you find a book where you enjoy and relate to most of the characters. From the protagonist to the staff at Everless, each one is fully developed and invite you in to this world. They are likeable, unlikeable and with one in particular you will be utterly conflicted from start to finish.

Jules is strong, angry and the perfect protagonist to be on this journey with. Her voice is clear and strong, even when under pressure.

Interestingly, it is Liam who was my favourite character from the outset. For the first time, I’ve not trusted the protagonist’s opinion. I willed it to be false. I put that down, in part, to Sara Holland’s writing.

It’s a heroes quest unlike any I’ve read before. It pulls you in from the very start and you’re along for the ride as ? learns about herself and the dangerous world she lives in.

The addition of the time bleeding and blood iron is genius. Elements relating to time can often feel overwhelmingly futuristic. However, we are treated to what I would consider a delightful fusion of steam punk and Historical Britain.

Sara Holland’s first person narrative unlike anything else I’ve ever experienced before. The ability to develop other characters and imply that there is an alternative view is utterly seamless. It’s only reflecting that I’ve realised I questioned Jules’ understanding throughout the novel.

The only time I stopped reading was when i paused to text my best friend, Gem, to tell her that she has to read this book.

One thing that really hit home with me was this quote: “It’s possible to feel joy and grief at the same time.”

No one, not even myself, has ever been able to articulate how depression feels to me. Not only has Holland done this, she has done it in such a beautiful and haunting way.

Welcome to The Queens of Geekdom Book Challenge 2018!

They will be a mix of new releases and #QOG favourites.

The list below are some of my  favourites combined with some up and coming releases for 2018.

This is not a list anyone should feel obliged to stick to, they are just suggestions of ones I love and ones I am looking forward to! 😊

If you want to join in with myself and @hscptcrash  the hashtag for this is  #QOGAZ  (I’d get so many Scrabble points for this!)

Throughout 2018 we will be posting about this challenge, and we will be reading books in any order so don’t think you have to start with A!

I’ve included a link to order the book through Waterstones as I worked with them for 7 years, but obvs feel free to order from whoever your preferred supplier is or get them in libraries, charity shops or as I do Abebooks.co.uk.

My friend, @ChelleyToy (award winning blogger extraordinaire, who gives wonderful hugs) is hosting a British Books Challenge, so if you could combine the two that would be even more spectacular! Chelley’s link to sign up is below;

The Queens of Geekdom Book Challenge 2018!

U; (The) Upside of Unrequited https://www.waterstones.com/book/the-upside-of-unrequited/becky-albertalli/9780141356112