About
Lara Croft is the fiercely independent daughter of an eccentric adventurer who vanished years earlier. Hoping to solve the mystery of her father’s disappearance, Croft embarks on a perilous journey to his last-known destination — a fabled tomb on a mythical island that might be somewhere off the coast of Japan. The stakes couldn’t be higher as Lara must rely on her sharp mind, blind faith and stubborn spirit to venture into the unknown. 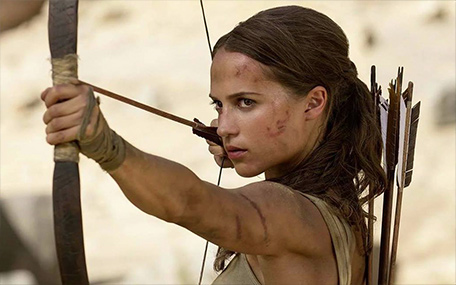 The Good
Alicia Vikander is the perfect fit for the rebooted game. Not only for a modern audience wanting a hint of realism to their movies, but in terms of being the perfect incarnation of the 2013 game reboot that the movie is based upon.
It’s unfair to compare Vikander to Angelina Jolie, but you will be forgiven for doing so. Making her younger and removing the inheritance was a brilliant move. Showing her strength and friendships also make her more sympathetic.

The Bad
The plot was frustrating for me. I can’t put my finger on it, but it felt a little choppy. The game-play sequences certainly were the best parts, but the plot was almost shoe horned around it. The lack of friends joining her on the mission to find her father is also a misstep. To spend all that time setting up her current lifestyle and social circle, to drop it completely for the second act makes me feel like it was time wasted.

The Ugly
So, I have many problems with this film. It ranges from the tone of the movie to the characterisations.