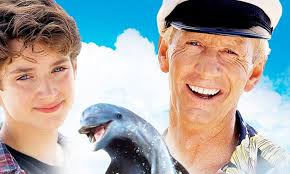 Rating: PG
Length: 1hr 35
Release: 2.8.1996
Dir: Alan Shapiro
About: Sandy is distraught when, having saved Flipper by pulling out a spear, his father insists the dolphin be released. A grateful Flipper, however, returns the favour when Sandy is threatened by sharks.

While the location is a dream, and the leads are charming, the plot is very much a dud and as lifeless as the animatronic dolphins used.