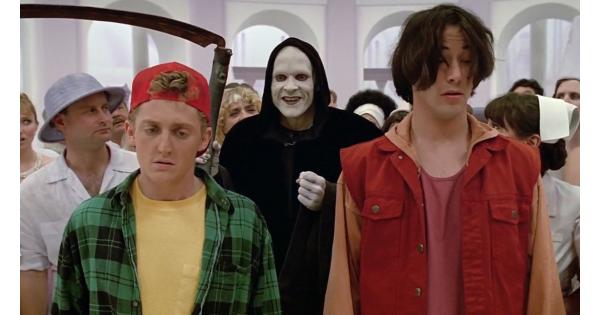 Rating PG
Length 1h 33
Release 3.1.1992
Director Peter Hewitt
About Two robots Evil Bill and Evil Ted are sent by Chuck De Nomolos to the 20th century where they try to stop their doppelgangers Bill and Ted respectively from winning a band competition.

I saw Bogus Journey before I saw Excellent Adventure, I think. I loved this film; it was funny, a little bit scary and Station totally suckered me in with that Ewok, but not, vibe.
It was one of the first films that I could embody the Captain America meme and “get that reference”. Yes, the film makes it obvious by having the Star Trek episode play not long before we’re placed at the scene but, come on, I was 8 when I first saw this movie.
It was bought for my Dad, on VHS, for Christmas. I always wondered if dad had seen the first or even knew of its existence upon opening this VHS. Either way, dad must have liked it because it became staple viewing in the Hunter household.

Not only is this an excellent offering for a franchise, it also works well as a stand alone movie. It’s a film I will return to many times over the years and enjoy every single time.