Designated Survivor Series 2 Episode 1 (One Year In)
Netflix air date: 28th September 2017
From IMDB: Now, one year into office, Kirkman is a Commander-in-chief determined to rebuild the capitol and capture the terrorists behind the catastrophic attack on the United States. When Ukrainian nationalists hijack a Russian Air flight, the president is faced with a hostage situation in which his diplomatic skills are put to the test.

I’m not one for politics. Office politics, politics of the heart, actual politics. So it’s rather odd that I’ve found myself very excited when I got an alert to tell me this show was ready to watch this morning.

I got into the Kiefer Sutherland fronted show during a weekend trip to Copenhagen. Myself and a friend had made the most of what we discovered was ‘bottomless’ wine at our hotel’s reception. Their cunning plan worked; at the end of the hour we purchased a whole bottle, put our world weary feet in the tub and watched the first four episodes of this epic show. By the time we landed back in the UK 27 hours later, I was up to speed and awaiting the weekly updates.

So now, we’re one year in and Kirkman has changed. His wardrobe is smoother, classier than the pilot. He has grown in confidence and, damn, I like it. We get a glimpse of his daily life in Office before being shuttled right in as if we haven’t left.

Over the Pond in Amsterdam, Hannah is hot on the tail of wanted man; Patrick Lloyd. At first I’m thinking that it’s nice to see Maggie Q’s agent Hannah Wells with her hair down. Only, very quickly we discover she’s still working the mission.
Her target is discovered to be a mistaken identify and she intones “You’re a Brit pretending to be Dutch.”

Only I’m scratching my head, because I know this bloke is neither. I recognise him and I don’t know where from. However, I knew he was Australian. A quick IMDB search; ding, ding, ding it’s Frazer from Neighbours.

Back to the White House where the problem between rivalling Russia and Ukraine is reaching fever pitch. There’s a nice little pun thrown in by the Russian diplomat; “We don’t cry uncle.”

Kal Penn’s Seth is seemingly having a tough time. I’m a little sad because he’s sporting some facial fuzz and he’s one of very few crushes that I prefer clean shaven. Seth has a rather middle ground sort of episode, but rallies in the end with a moving speech. 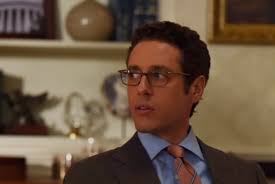 New comer character Lyor Boone is introduced early on and it doesn’t take long for me to loath him with a passion. By the time he utters the words ‘Oh hey gang…’ I am hoping there’s a fiery death in his future.

About halfway through I’ve realised that the Russia hijacking plot is essentially the Humperdink plot from Princess Bride; Florin using Guilder guise to purposely start a war. It’s genius, and possibly happens more than we think.

When Kirkman discovers this and confronts both, he is able to speak fluent Russian. While part of me did a little fist pump at the fact that Tom Kirkman isn’t blindsided. However, I’m also a bit worried that it encroached into Mary Sue territory. Too perfect, too coincidental. Such a shame as I would have loved for a line to be dropped in the previous series. Ah well, no more please.

We end on a cliff-hanger; Hannah is looking in the wrong place for Llyod.