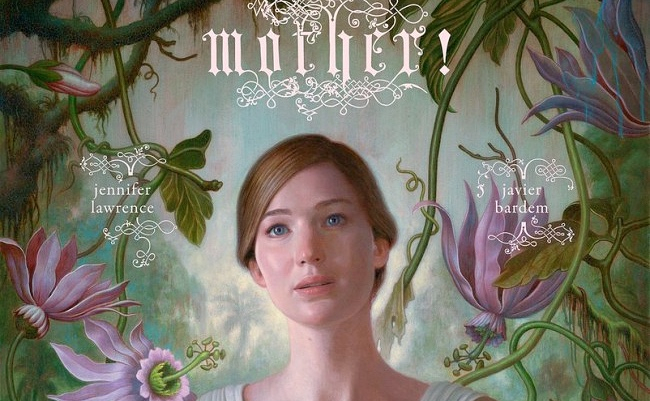 My head was messed for a good few hours after watching this film. I predicted some, but not all, of the metaphors within the film. It was only one of the final act’s lines that gave me an indication as to the biblical allegory presented within the set piece of a house.
Since reading up about the Biblical context, it’s easier to seen some of the more overt imagery and themes. Something which would have sat better with me had this been an open interpretation.

The Good
The film contains a good calibre of actors who work well together. Jennifer Lawrence is amazing at ‘Mother’; always at the edge of sanity as her husband pushes her boundaries and seemingly put guests before her. She is our eyes within this crazy world; you feel her confusion and abandonment. However, even going into the final scene, you are left wondering if it’s all in her head.

The scene stealer has to be Michelle Pfeiffer as ‘Woman’; wife to Ed Harris’ ‘Man’. I hadn’t realised until after the credits had rolled and I was halfway home; none of the characters were ever referred to by name.

Domhnall alert! Not in it long, but I was grateful for the few scenes he was in. Playing the ‘Older brother’ to his own brother, Brian it did leave me wishing that casting had gone in for a hattrick and put Brendan in place of Ed Harris.

It’s slow. It’s quiet. It’s NOT a horror. Whoever they have in charge for the marketing campaign needs to be sent back to film school; yes, there are horrific scenes, however that is not what the mass audience will expect when paying their £10 plus to put their bums on the seats.

It picks up speed in the final act, but it becomes so busy I felt like I was on a fairground ride. It’s hard to keep track of the action and you can’t help but feel on edge.

Literally the phrase ‘viewer discretion is advised’ has never meant so much. As I’ve mentioned briefly, this film is a Biblical allegory. Mother, is representative of mother earth and both ‘Man’ and ‘Woman’ are Adam and Eve.

While most of the plot contains itself to Genesis, the final act draws on the development of humanity and religion along with the treatment of Jesus. Jennifer Lawrence shows a different form of immaculate conception as she just ‘knows’ she is pregnant. It’s a scene that sits uncomfortably with me.
However, it would have been my winner had her baby; who remains unnamed is passed around the cultish gathering within their family home. I think you have to have a stomach of lead to get through the scene in which a baby less than 24 hours old becomes a metaphor for the last supper and crucifixion of Jesus.

I’ve failed to talk about ‘Him’. The creator who abandons his wife because he need to be with his ‘fans’ and allows his new born baby to be killed, only to insist on them being forgiven. Of course, this is the allegorical God; played by Javier Bardem in a depression filled role. It doesn’t sit right with me.
While it can be said that he plays a good characterisation of the God within the Old Testement, it was Bardem’s performance that stopped me from working it out sooner.
The creator is too flawed, too weak and too petulant to be my understanding of God; no matter which Testement He is taken from. God should not be flawed; meaning the beginning and final scenes are rendering God no longer infallible. (Quick, someone get Bethany. Up is about to become down, black will become white…)

Not only that, this divisive interpretation puts the blame of the destruction of the world at God’s door. Many people who know me, know I’m agnostic and do not practise any faith. However, Global warming, idolatry and the perverse acts of mankind (killings, rape, Trump) are our own doing. To not only encourage the thought that it is the fault of a higher power, let alone have it come from ‘His’ mouth, is simply insulting.

Also, I’m an RE teacher! Do you have any idea how frustrating it is to discover these films rich in religious content, to realise that the age rating disallows its use? Hollywood; give me some age appropriate goods.

One thought on “mother! 18 (Spoilers within) #filmreview #Han @gemlovesbooks”