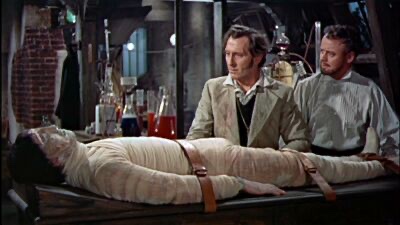 About: Victor Frankenstein (Peter Cushing) is a brilliant scientist willing to stop at nothing in his quest to reanimate a deceased body. After alienating his longtime friend and partner, Paul Krempe (Robert Urquhart), with his extreme methods, Frankenstein assembles a hideous creature (Christopher Lee) out of dead body parts and succeeds in bringing it to life. But the monster is not as obedient or docile as Frankenstein expected, and it runs amok, resulting in murder and mayhem.